Introduced and unintroduced nobility in Sweden

In order for the family to be included in introduced nobility, it is necessary that the House was ennobled or naturalized by a Swedish king, which is no longer possible, and that the ennobled had payed the money for the introduction fee , which was very expensive, and the ennobled had to written an application letter to Riddarhuset and that the request was granted.

Several newly ennobled Swedish families did not care about it or did not have political interest or for other reasons did not think it was worth the money, so they received a nobility letter and a coat of arms but never became members of the Riddarhuset with accompanying privileges.

The unintroduced nobility in Sweden has never automatically had privileges or powers, unlike the Swedish nobility, but only the rights and obligations that belong to all Swedish citizens.

Many, but not all, of the unintroduced nobility are members of Ointroducerad Adels Förening ("The Association of the Unintroduced Nobility"). The association has no official position and decides after examination which families are allowed to join the association.

Ranking in terms of both introduced nobility and unintroduced nobility is considered equivalent. However, it is not possible to compare nobility titles because of the large differences between different countries nobility systems and the number of degrees. At Riddarhuset there are ordinary nobles, kommendörsätter, friherre (baron) and greve (count).

Kommendörsätt was a Swedish unique rank that was only awarded by Gustav III and Gustav IV and was ranked higher than ordinary nobility but ranked bellow baron. Kommendörsätt was linked to towards Swedish Royal orders of Knighthood during Gustav III and Gustav IV. Gustav III invented the rank to be able to promote ordinary nobles without upsetting barons who thought that there was too many nobles promoted into barons.

A new rule was introduced in Sweden in 1809 that only the newly ennobled or newly promoted got the noble title or the new rank if they where raised to a higher rank. When the ennobled died the new title or the nobilety passed only to the eldest son or eldest male line who descended from the ennobled. This could mean that only one person was noble at the same time for the new house.

The 1809 rule was created since the nobles wanted to decrease the numbers of newly enobled and also the decrease the numbers who was promoted into barons or counts. Those houses who was ennobled or promoted before that date was unaffected by that rule with a few exceptions like Beck-Friis where the nobility letter says that one person is count and the others are barons.

Ordinary nobility is most common and the lowest rank. Kommendörsätt is the next rank and also the least common since it only existed for a short period and becouse of the new 1809 rule where only one person at time has the title. Baron comes next and is more common than count since count is ranked higher than baron and the most counts are promoted barons and most barons are promoted ordinary nobility.

In Ointroducerad Adels Förening there are foreign nobility titles with rank higher than count that has never existed in Swedens nobility system such as marquis, duke and prince (furste). Is has also nobility ranks that does not exist at Riddarhuset like vicomte. Vicomte is a French title ranked higher than baron but ranked lower than count.

The title prince (furste) is not the same as king but the rank of a noble, unless it is sovereign prince ie prince of something, such as Prince of Pontecorvo or Prince of Monaco, then it is a head of state.

Duke also has different meanings in different countries. Swedish dukes are royal but not noble as a king is not a nobleman. In most other countries it is in many cases the opposite and duke is a nobility title.

Among the unintroduced association in year 2020 there are for example Belgian princely ennobled Bernadotte (descendants Belgian count), prince (furste) Cantacuzino, duke d'Otrante, the papal ennobled marquis Lagergren, marquis Joussineau de Tourdonnet, the Luxembourg ennobled count Bernadotte af Wisborg, several other counts and also vicomte d´Avignon. There are also many barons and many ordinary nobles and a few families who uses coat of arms since several generations but with no nobility proof found.

On the coat of arms, nobles may also have a corresponding rank coronet on top of the shield instead of the helmet and crest or the number of helmets assigned to the letter of nobility.

The letter of nobility may also prescribe a heart shield or supporters holding the shield or royal monograms or flags as mantling.

Furthermore, nobles can became members of exclusive private clubs, like Riddarhuset for introduced and Ointroducerad Adels Förening for others, where they can apply for scholarships.

In Finland there is Finlands Riddarhus ("The House of Nobility in Finland") which was opened during the time as a Russian Grand Principality. There every former Swedish noble houses living in Finland became naturalized with new numbers as a result where also all members are nobles regardless of the original ennobled year. An example is af Schulten, when ennobled in Sweden only one person became noble at the same time but when naturalized at Finlands Riddarhus all members on male lines became nobles as well.

An other thing to note about Finlands Riddarhus is that Furste (Prince) was also introduced as a new rank. But it was only given once. It was given in 1833 to the Governor General of Finland, Alexander Sergeyevich Menshikov so that he would become Finland's foremost nobleman. The house was extinct in 1893. No later Governor or other person got that rank.

Also, at Finlands Riddarhus the rank of Kommendörsätt does not exist since they are linked to towards Swedish Royal orders of Knighthood during Gustav III and Gustav IV.

Nobility titles in some countries

The titles is arranged so that the highest comes first.

Dutch (I have only found english translations of the names)
1. Prince.
2. Duke.
3. Marquis.
4. Count.
5. Viscount.
6. Baron.
7. Knight.
8. People in the nobility who have not been granted a title carry the predicate Jonkheer.

There has been nobility in most European countries and contested lands and even regional titles but I can not cover more here. Many of todays nations like Italy and Spain used to be different smaller nations with regional titles.

My point is only that most countries uses different unique titles systems so it is not possible to make an accurate comparasion between different systems and the same English name is not not necessarily the same rank or position in each country. And some times the same english word can describe more than one title since for example the Danish titles Lensbaron and Friherre are both translated into Baron while Lensbaron was a higher rank.

The nobles has lost all its privileges in most countries and in for example Germany the titles does not exist anymore as ranks since 1919 but are instead part heritable only as part of the legal surname like for example "Graf von Stauffenberg".

Books with nobility coat of arms

Magnus Bäckmark made an excellent triologi with digital photos at the coat of arms plates at Riddarhuset and has an introduction to all houses called "Riddarhusets vapensköldar".

G Granfeld wrote a book in in 1889 with every nobility coat of arms that existed at Finlands Riddarhus in 1889 with the title "Finlands ridderskaps och adels vapenbok".

In Sweden, the law officially ruled out ennoblement in 1974. However the last person who was ennobled by a Swedish King was Sven Hedin in 1902.

In Sweden there is "Serafimerorden", an offical Royal Knight order. However its only given to Swedish Royal members on birth and to their partner on marriage. It is never given to other swedish citizens. It is mostly given to none swedish citizens that belongs to foreign Royal Houses or are former high ministers or in a few cases to high military ranks.

In Sweden we have also a title system, but without Knighthood and coat of arms, called "hedersdoktor" (honorary doctor). Its often given to popular cultural figures such as musicians, writers and journalists. Sometimes it also given to amateur researchers or sometimes also politicians or ministers get the title as reward for long service. The title is linked to an university and are not a real academical title nor a nobility title.

There are also private organizations like Freemasons or Odd Fellow or Par Bricole that uses coat of arms and Knighthood.

However Sweden has a long history of burgher coat of arms, one can even be borned into a family or family compound like Ryssnäs-släkten that has a coat of arms, so a coat of arms has nothing to do with nobility in it self and there are several heraldic associations even within Sweden where some are local associations of either Svenska Heraldiska Föreningen or Societas Heraldica Scandinavica.

But my own coat of arms has symbols on it that can be interpretated like it.

Reinterpretation of my coat of arms by Björn Fridén 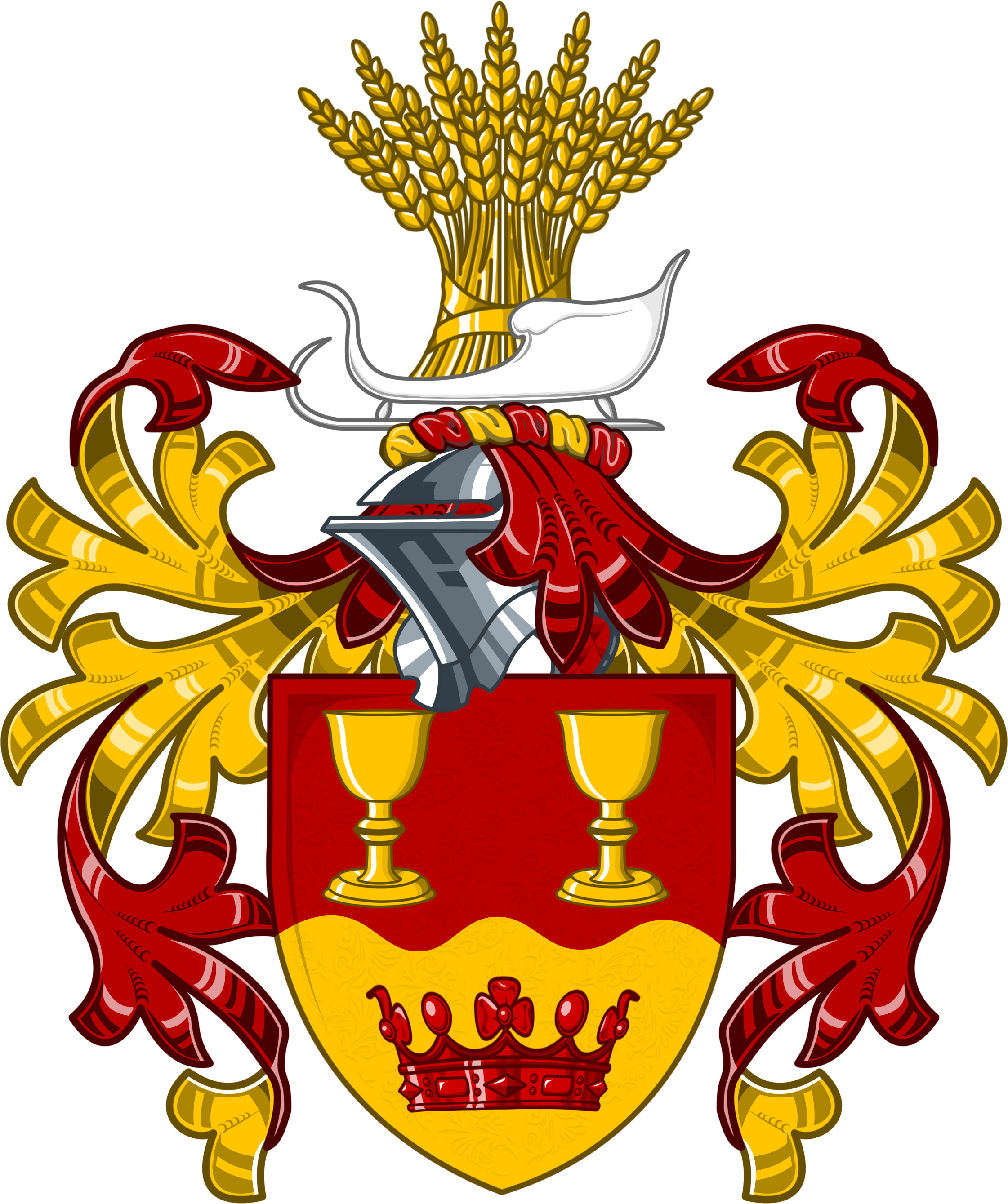