The noble House Uggla is the Swedish nobility house with the most number of members and branches. The house is a very old noble house and originates from Västergötland, but one branch moved to Finland sometimes in the 1600s and in addition, member also lives in Norway, Poland and the USA and is spread in several geographically distinct branches within Sweden. In the US, they are often inscribed under either the name Fredriksen or the name Hamilton, perhaps because of that the word Uggla can be misinterpreted as "Ugly" in English. Many branches of House Uggla descendants from House Vasa.

The name of the family comes after the shield motif, which is an owl (uggla in Swedish) in silver with a green twig in the claw standing on red bricks in a gold field. The crest consists of three silver feathers.

The Finnish branch of House Uggla was introduced on that of Russia when the newly established Finlands Riddarhus on January 29, 1818 as No. 4. The Finnish branch has its own variant of the coat of arms with the difference that the owl is blue and not of silver. However, it carries a completely identical crest as the Swedish branch.

House Uggla should not be confused with the House af Ugglas, which is a completely different family. 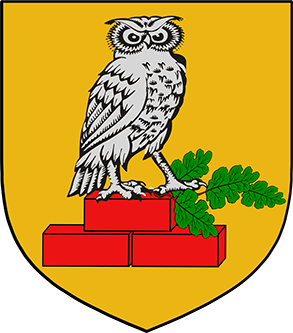 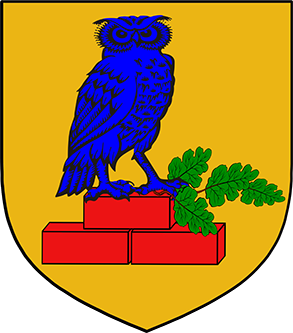 Admiral Claes Uggla was promoted to baron in 1676. As a coat of arms enhancement, the shield was squared with two cannons in field 1 and 4 and a coronet with two Swedish three-tongued flags in fields 2 and 3, and the coat of arms was also given a heart shield with an owl in. On top of the shield a baron coronet was placed. Both helmets have the original crest, ie three silver feathers. 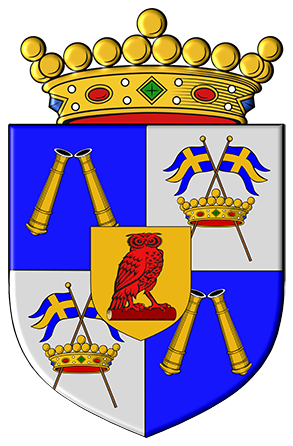 Eduardo Pazikas drawed this images used on this page with Uggla coat of arms according to my directives. He did it in high resolution pdf format. The images was created for use on an article for Svenska Heraldiska Föreningens homepage but the article was never published so I recycled them here.