Use of multiple coat of arms by Tomas Bragesjö

The Swedish King can use one coat of arms a King and an other as Duke.

It is also possible to change the burgher coat arms one uses. Nobles can not changed coat of arms unless promoted into a hiegher rank or after Royal permissions.

Nobles can only use their own coat of arms with a few exceptions. One example is by entail and Royal permission that the holder should use an other coat of arms together with hes own coat of arms. The most famous in Sweden are entail from House Trolle.

Burgher coat of arms can in some cases by used togheter in a similar but not identical ways as a sort of two separate coat of arms while not actually being so. The most famous in Sweden are from Ryssnäs-släkten members.

Bellow are some extra details about the coat of arms.

The Trolle family originated from Småland and the ancestors can be traced back to at least the 1300s. Some genealogists claims that the line traces even futher back. The coat of arms of the Swedish family consists of a red headless troll on the shield and a red troll head as crest. The Swedish family actually died out in 1568. The family branch that had move to Skåne was introduced at Riddarhuset in 1689. There is also Trolle-Wachtmeister, a branch of the counts Wachtmeister af Johannishus, Trolle-Bonde, a branch of the counts Bonde af Björnö, and Trolle-Löwen, a branch of the baron family Löwen, where entail created the names and royal permission that the holder should use House Trolle coat of arms together with hes own coat of arms.

One Swedish branch was promoted to Baron 1816-02-27 with the condition that the baron rank is personal and only the ennobled oldest male decendant inherits the title, thus only one person at the same time has the baron rank while the other males lines are ordinary noble. One Danish branch was promoted to Lensbaron in 1672 but became extinkt in 1722 and the Barony was returned to the crown. 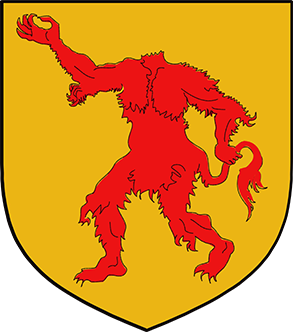 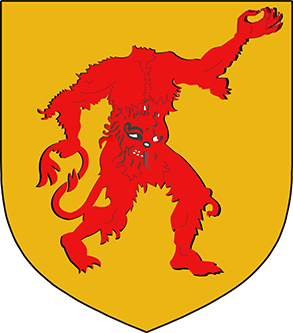 Plate with Ryssnäs-släktens coat of arms. 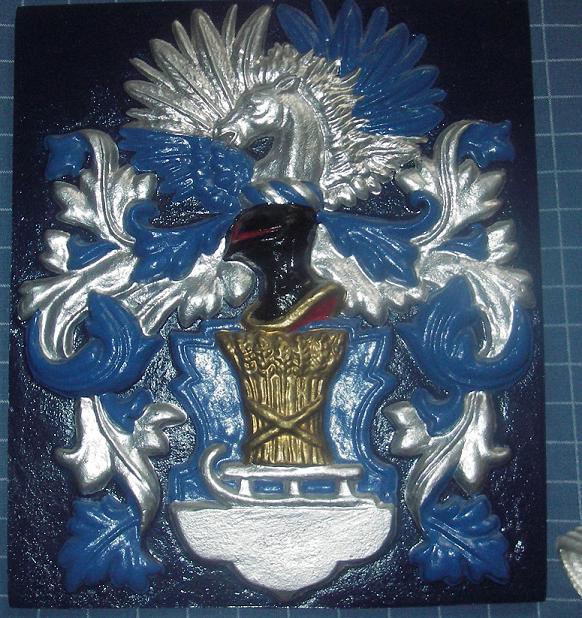 This means that it is possible to the use coat of arms but not used as ones personal coat of arms. The plate can only to be used as a sign of being a Ryssnäs-släkten member.

However several later coat of arms has been inspired and used elements from Ryssnäs-släktens coat of arms. Bellow is an sample image on how use the plate and ones own own coat of arms. This is possible since the plate simply an item, is does not say that the plate is ones owns personal coat of arms. 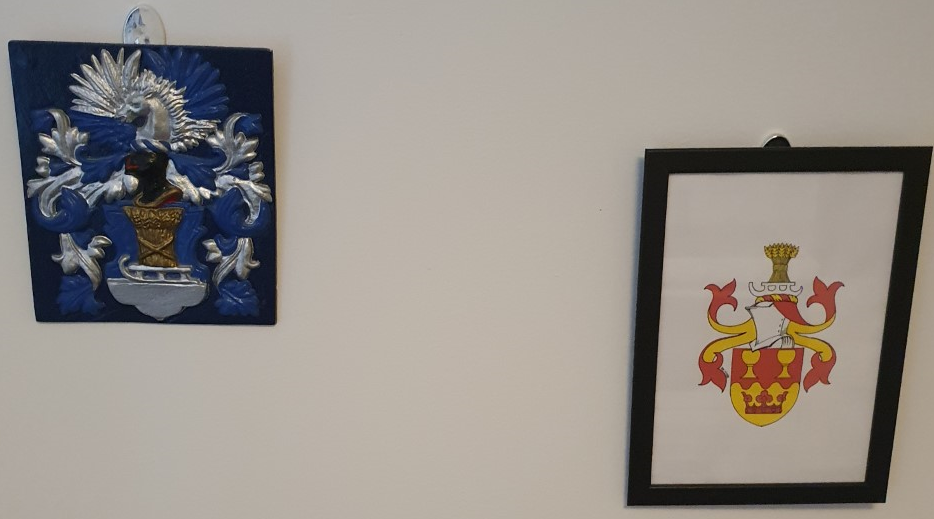 Ryssnäs-släkten is a farmer's family from Borås that has been documented since the 17th century. It is named after the farm Ryssnäs in Viareds parish and is one of Sweden's largest documented families that regularly publishes family books. Their coat of arms was composed in 1955 by the Finnish heraldry Gunnar Clemens. The coat of arms is based on a family history. The legend tells the family's ancestor, Nils Nilsson, was on a business trip in Russia, a fire occurred in Borås in 1681. He then hurried home by crossing the ice in a sledge, bedded in hay to keep warm. The crest consists of a horse's head of silver between two wings divided in silver and blue and in blue and silver respectively, and symbolizes the Wrangel cavalry regiment since the oldest known members where first farmers (frälsebonde) under house Wrangel and later supporting farmers (rusthållare) for the regiment. 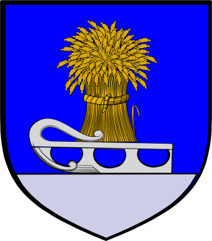 The coat or arms is the model for at least two new coat of arms: Bragesjö and Holm.

My shield has nothing to do with the Ryssnäs-släkten. I am part of Ryssnäs-släkten via distant women's path on my grandmother's side. My coat of arms is based on god Bragi from Norse mythology with cups which symbolizes Bragarfull which together with a wave becomes Bragesjö (Bragi-lake, or as one say in English - the lake of Bragi). There is a small connection to Västergötland in that my grandfather's father Johan Alfred Johansson grew up in Skaraborg county but Borås is in Älvsborgs county. I do not use Ryssnäs-släktens shield straight off as a crest. However, I use parts of the elements from Ryssnäs-släktens family shield as crest and marking of distant kinship. One can be inspired by and used elements found in other shields without saying that you are the sole heir to that shield.

Fredrik Holm's coat of arms as Freemason show that he is a member of Ryssnäs-släkten. The wool scissors show that he lives in Borås. He shows the staff a career choice. Note that the shield is not divided into formal individual fields so it is a new coat of arms and not an alliance coat of arms. 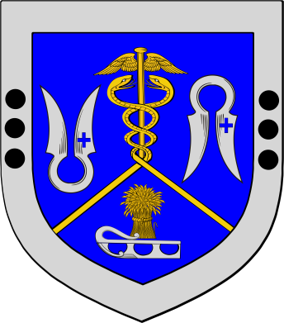 My primary working place in my appartment

Eduardo Pazikas drawed most this images used on this page according to my directive. He did it in high resolution pdf format that I converted into web format. The images was created for use on different articles I wrote for Svenska Heraldiska Föreningens magazine Vapenbilden that I recycle here. The only exception are Plate with Ryssnäs-släktens coat of arms section where I have taken the photos. The version of my coat of arms on the photo is the oldest version of coat of arms. It was painted in black and white by the Royal Danish courts armspainter Ronny Andersen for free as a first draft and I filled in the colors myself. After that I ordered a painting from him with motto and more effort put into the painting.