I started to play Correspondence Chess in 2016. Link to my profile. First years I only played in unrated thematical events (fixed opening moves).

After much success and several tournament victorys the national fedration contacted my and got my into my first rated class tournament, a class H event (middle class) as well as introducing me to Team Matches. After that I got Elo I play in class M events(highest class) and got a CCE title and played for Team Sweden in team tournaments as well and also played for Team Europe vs Team Rest of the World .

I won my 2nd class H tournament and thus reached the hiegest class automaticly. However I already got a Elo rating high enough to played in hiegest class so I did not need the victory when the event was completed. 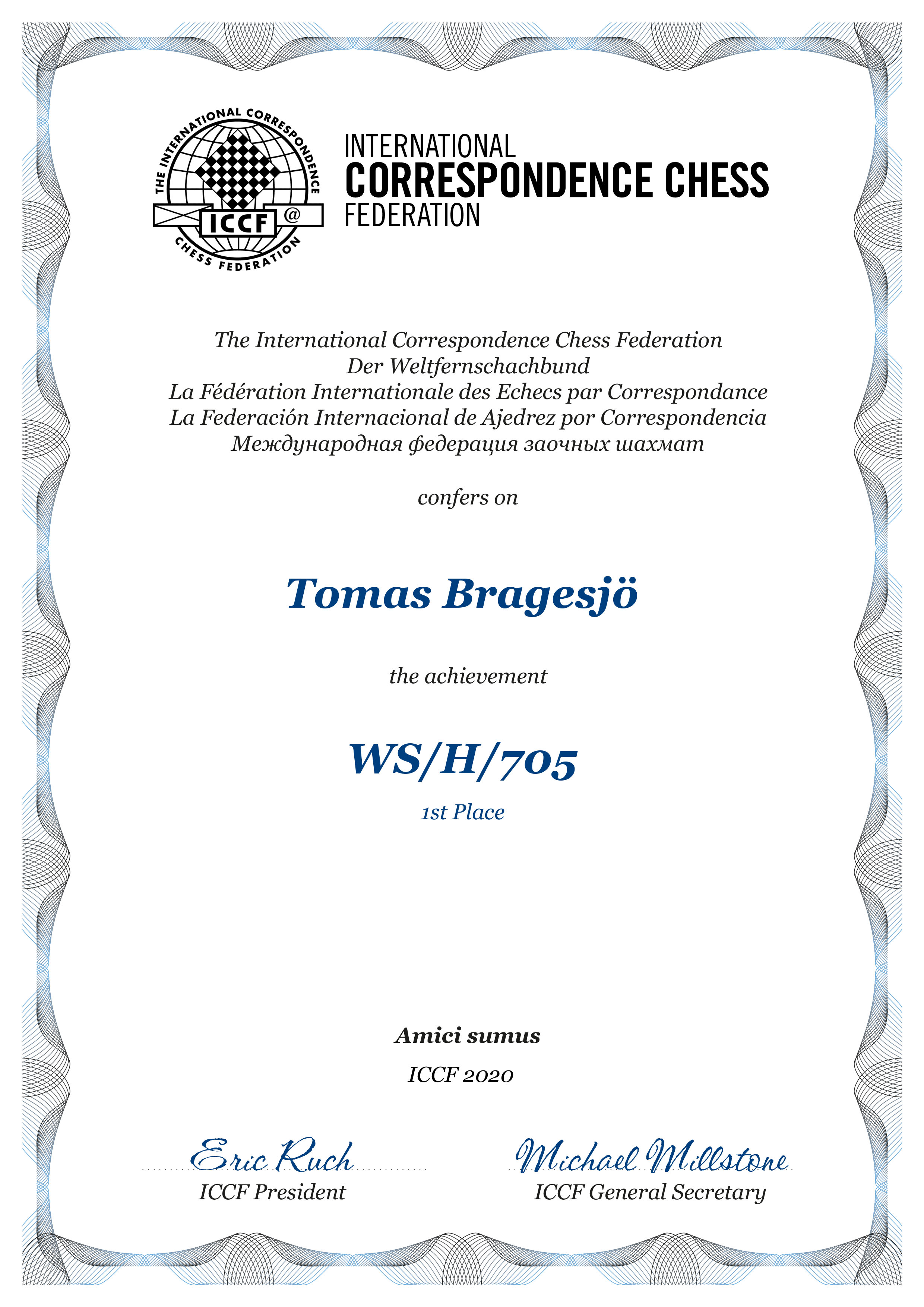 After plaing in some events in hiegest class I got a diploma for a 3rd place. 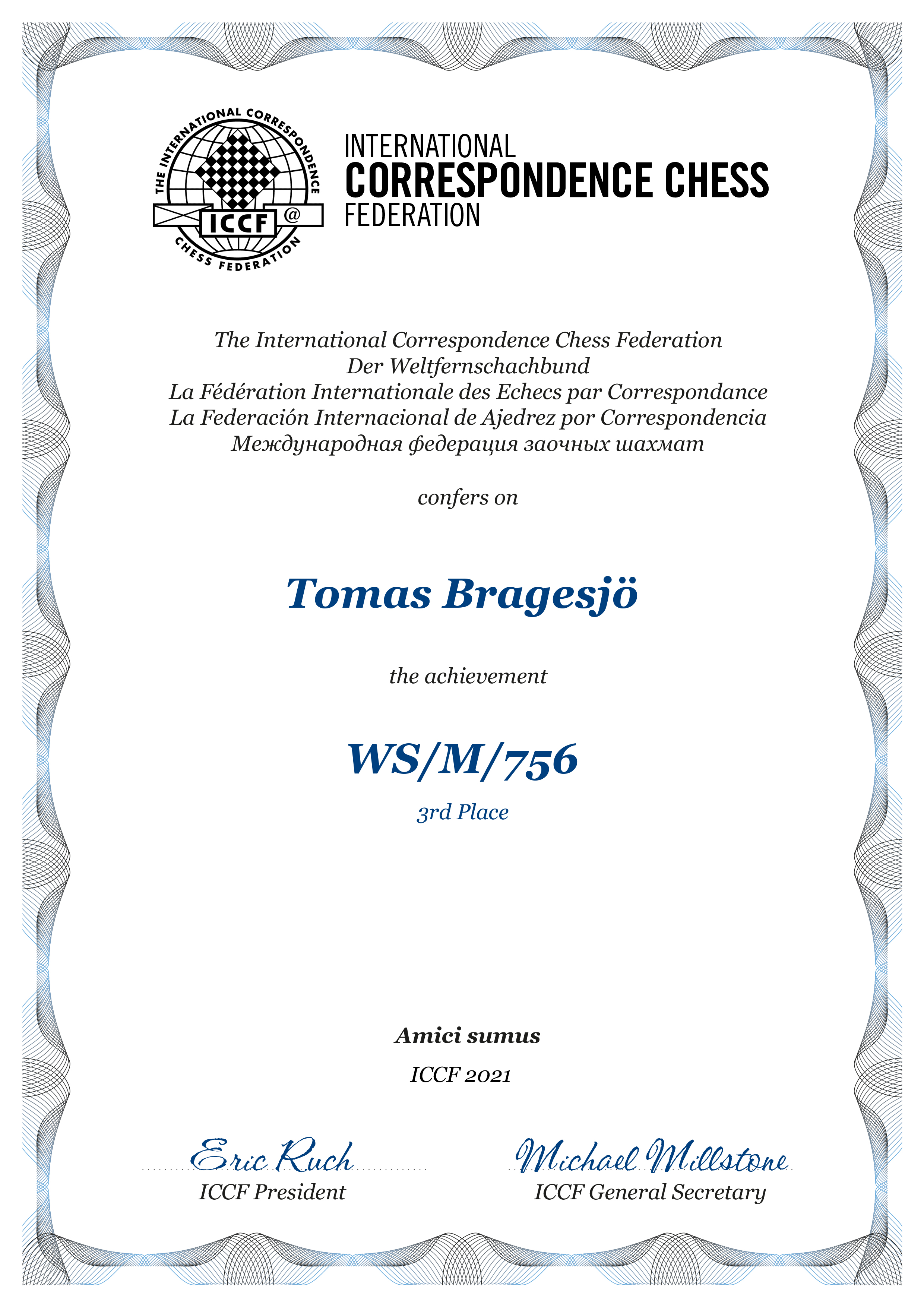 Since its difficult to win in the modern Computer era it can take years or decades to get a high enough Elo rating to be able to play in events with possible norms for higher titles unless one has high FIDE Elo rating in the first place thus gets higher start Elo. In my personal experience, as of today there are not that much difference between 1900 Elo and 2200 Elo in Correspondence Chess except better openings while in over the board Chess has larger difference. 2300 and 2500 in Correspondence Chess are about the same in every single way, better openings and more patience than 1900-2200 but still that much better. The main diffence is what the events type, higher types of events has higher average Elo rating.

In the future I predict that it will take even longer to get higher Elo rating unless high FIDE Elo since Computers are getting stronger every year, thus one can never breach ones start Elo since draws cost Elo and wins are rare. Opening books are getting better with less ommited lines. In many of todays super elite tournaments one single win and no loses can lead to tournament victory. The same principle is also true at ameuter level in many Finals in some Thematical events (fixed opening moves).

Thus Elo system and Correspondence Chess titles works perfectly for two categorys of players. The first category are those who started played Correspondence Chess before Computers reached todays standard and the other category are those with high FIDE Elo. These players often players in closed events where one needs high rating to enter and thus theire Elo stays high and thus are not actually not better that the Elo indicates. Other players plays in class events where one rarely gains Elo since wins are rare or plays in open events where draws costs more and draws are the most common results since Computers makes less mistakes.

The CCE title is the corresponding rank of the WIM title. The title WIM are not granted in Correspondence Chess anymore and has become gender neutral and anyone can get the title regardless of gender. Female players has the extra option to change CCE to LIM.

The next rank the title CCM and are the corresponding rank of the WGM title and the title WGM are not granted anymore in Correspondence Chess and has become gender neutral and anyone can get the title regardless of gender. Female players has the extra option to change CCM to LGM.

Next rank is IM and after that SIM and highest rank is GM.

Arbiters can also get special titles, but I am no shure how it works.

Players that does not have high FIDE elo or played before computers became good can normally only get CCE or in some cases CCM titles. This is how the systems works, I have taken points vs GM:s, SIM:s and IM:s in Thematical urated events and vs IM:s in rated event and thats an indicator the CCE players are not weaker than higher titled players.

I got my first title norm for the title CCE (Correspondence Chess Expert) in 2020. To get the title 2 norms are needed. One must also play a minimun amount of total norm games in the norms events as well. I got my 2nd norm, and thus the title, in 2021. To get a norm one has to score a minimun score in a closed norm event. Minimum score for norms is depending on type of event, even if the same norm type event. The lower type of events needs much higher score than than higher type of event. The type is depending on avarge ratings of all players. The type on can play is depending on Elo rating. In order to play one must have enough high Correspondence Chess Elo. I was lucky in some games where I was a bit worse and also took some tactical draws in both event to secure the norms.

Is also possible to get norms on other terms in other special events as well but most tournamnets has not got norm chanses unless one reaches final and only the final event has it. The score needed are depending on opponents average rating. A CCM I chatted with after I got my CCE title said thats easier to get norms, partcullary CCM norms, in open special open tournamnets since there are usually some weaker players when can win over and some higher rated one might draw than in dedicated norm events that I got my CCE norms in. 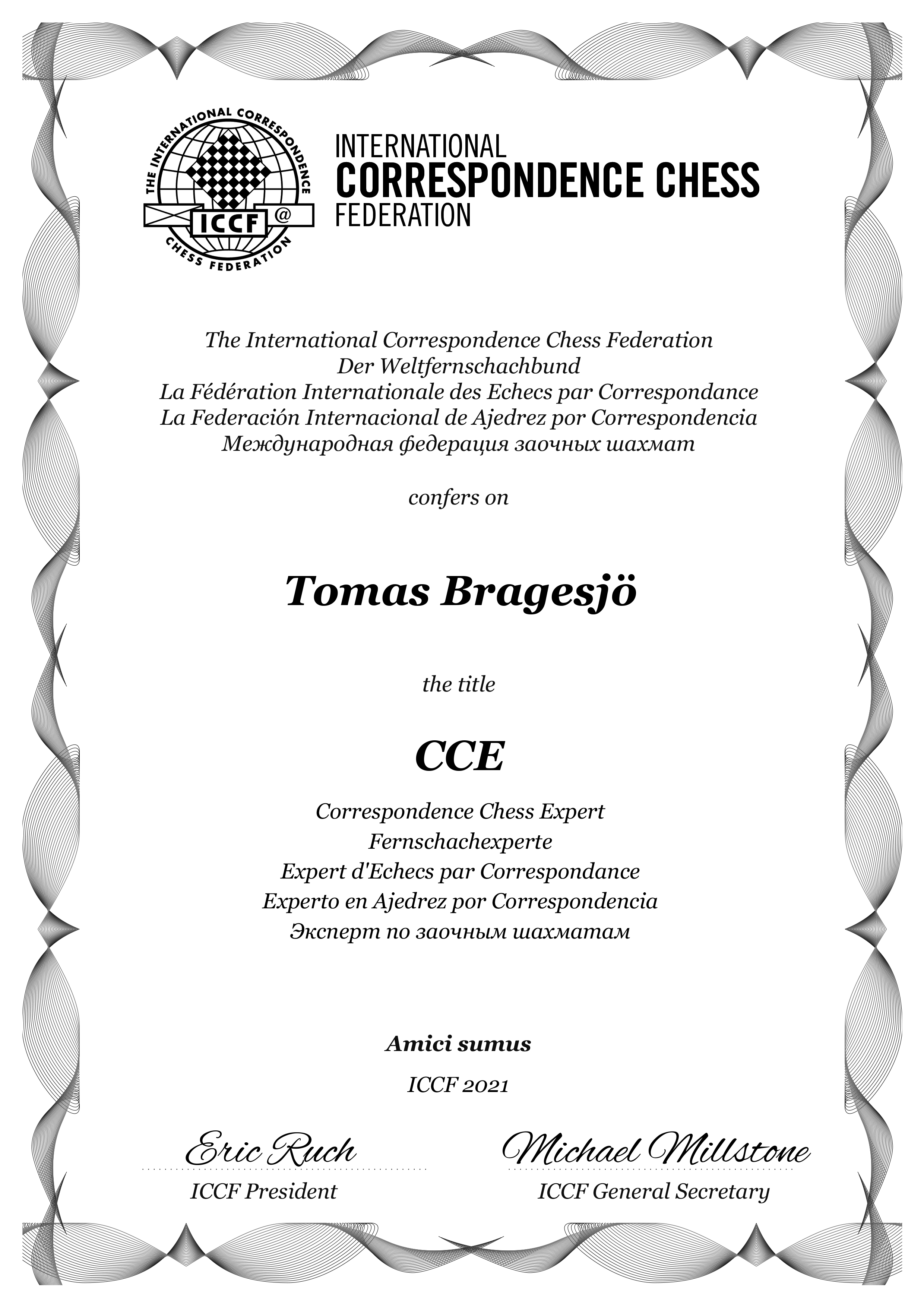 My best tips for success in modern Correspondence Chess

Also dont play to many games at once, in my personal experince one plays worse and plays to fast.

The key to succes in Correspondence Chess is the opening fase. Without relevant imbalances its hard to win. Also make shure than one has an updated opening book.

I have bougt many opening bases from Modern Chess as backbone of a repertoire where I use some bases on over the board and some in Correspondence Chess play. However different authors are better than others. Some bases has great omnitions.

One can also not trust books or discs or databases blindly. Some lines given in books quating games by two 2600 Elo players can lose by force after Correspondence Chess improvments.

Updated databases with high level games are essintial to get guidence and updated ideas in the opening. In one is luckly one can see what moves opponnet played in the past to get preparation.

I have both surived and won some games by having bought 6 men tablebases on a USB drive. Tablebases also exist online with 7 men. Tablebases has every position with 7 or 6 or less figurer solved so one always plays optimal Chess. It is possible to claim wins or draws based on Tablebases. I use online to check 7 figurer when few pieces left while my computer can check 6 figures automatic even before having that number of pieices left in it within the horizon.

Its importent to have the latest version of ones favorite Chess analys engine. One must also know where engines can be trused or not. In many positions engines can be missleading. In recent years AI like "Alpha Zero" clones has improved engines strength but the AI engines often uses powerfull graphic cards to make calculations and not only CPU and RAM thus one neads a strong gaming laptop or computer. The better CPU and more RAM the faster the engines works. However in 2020 engines with other engines with "NNUE" technolgy appered the only uses CPU power.

How to win in Correspondence Chess

In the modern Computer age is very difficult to win regardless of rating difference. High rating does not mean strength it meen either high FIDE elo = higher start ELO or that the player played Correspondence Chess before Computers reached todays standard. Titles also meens little these days, I have even met IM:s with lower rating than me. At higher level a single win and no loses can lead to tournament victorys, this is also true in some Finals in Thematical events.

To win a game something from the list bellow must happend:

I will try to get a higher title called CCM (Correspondence Chess Master). I will also play more in open events and not only class events and norms events. I wil stop playing in thematical events and only play rated games.

I hope to win the hieghest class tournamnets someday in a not to distant future to compete in World Chess Championship qualification.

I also hope to win Swedish Correspondence Chess Championship someday but this will be only in a very distant future.