I wanted a coat of arms based on my family name. We came up with the idea of Bragarfull (Bragi cups) a wavy and a coronet to match my family name and origin best. We selected red and gold tinctures since my mothers fathers was born in Skåne.

As crest we used a wheat sheaf on top of a sleigh to show kinship with Ryssnäs-släkten to create a coat of arms where every line at my family tree was covered since the wheat sheaf and the sleigh is the main theme of Ryssnäs-släktens shield. Ronny Andersen gave me a free black and white draft of my coat of arms and I filled in the colors myself and I like it and after that I ordered Ronny Andersen to draw a painting with more effort put into into with motto and colors.

The image bellow is a scan from the magazine Vapenbilden 60 in 2004. 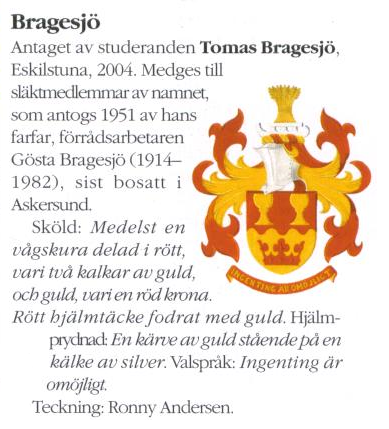 Later my coat of arms entered Svenskt Vapenregister as SV 11 and after that Skandinavisk Vapenrulla as SVR 709/2011.

My crest is inspired by Ryssnäs-släktens coat of arms shields main theme. I am a member of Ryssnäs-släkten on distant female lines at my mothers side.

I had also seen other coat of arms with wavys like Coombs coat of arms that has also a wavy in the middle but it was not a primary inspiration and there are even more differences there since it is completly different objects of completly different categorys both at top of wavy and a lower part of wavy and there are also not even the same tinctures of any of the objects.

Blom coat of arms has also a wavy but it is not in the middle nor has any common items or look similar to my shield at all. We have same tinctures but reversed places.

A final shield that inspired me was Rehbander but the only thing in common is a coronet. We do not even have the same color at the coronet, or the coronet placed at same position at the shield. Rehbander has also jewelry at the coronet in the blazon.

I know that several other coat or arms has been inspired by my coat of arms where some are inspired by my shield and others by my crest but I will not list them here.

My motto "Nothing is impossible" is inspired by the Swedish ski legend Gunde Svan.

Swedish blazon according to Svenskt Vapenregister

English blazon according to Jesper Wasling

Shield: Per fess wavy gules two cups or, and or a coronet gules.

Crest: On a sleigh argent, a garb or.

Drawing by Magnus Bäckmark who also helped me with the research.

My favorite coat of arms drawing 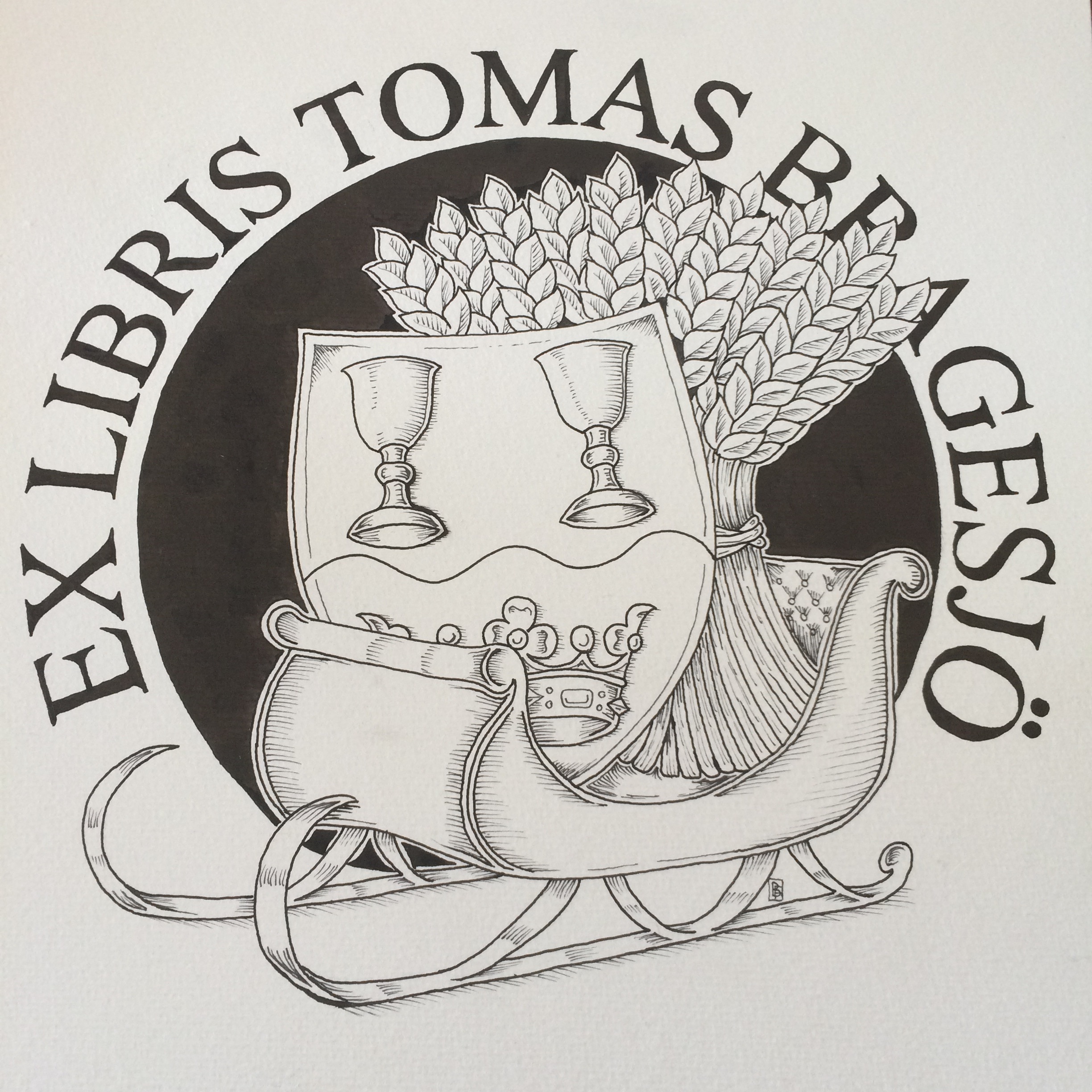 I have more drawings by many other artists including more by Ronny Andersen. See the rest of my site.

For more photos of me and my ancesters click here.

Plate with Ryssnäs-släktens coat of arms

A plate with Ryssnäs-släktens coat of arm and a drawing of my oldest version of my coat of arms.

My primary working place in my appartment

Picture of my primary working place in my appartment.

Some of my diplomas 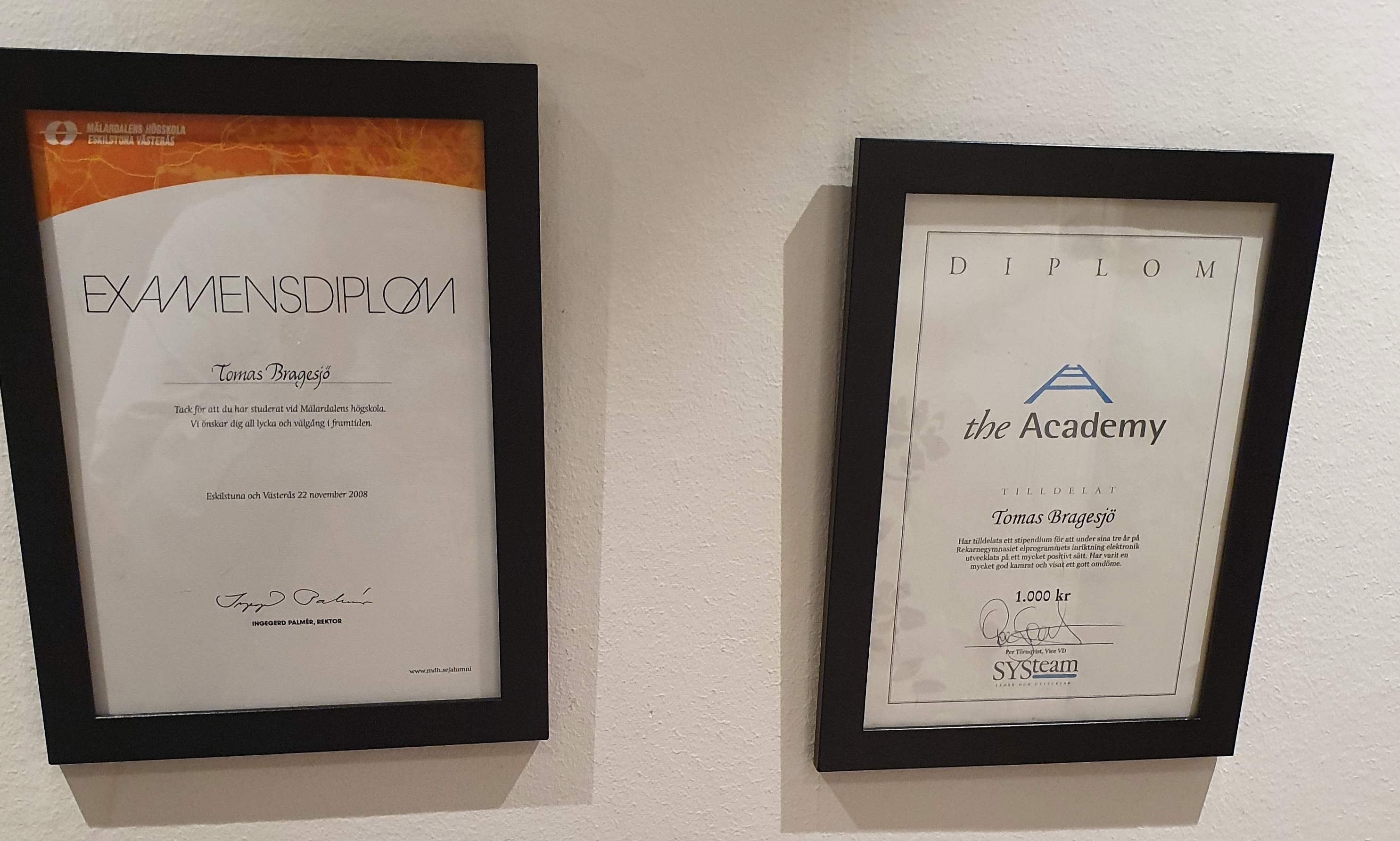